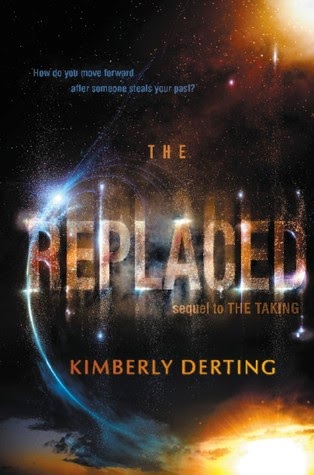 Description from Goodreads: Romantic and action-packed, THE REPLACED is the gripping second installment in the Taking trilogy.
Kyra hasn't been the same since she returned from her mysterious five-year disappearance. Now, on the fun from NSA, Kyra is forced to hide out with other who, like her, have been Returned. Yet she is determined to find Tyler, the boy she loves who was also abducted-- all because of her. When her group intercepts a message that Tyler might still be alive but is in the hands of a shadowy government organization that experiments on the Returned, Kyrs knows it's a risk to go after him. What if it's a trap? And worse, what if the Returned Tyler isn't the same boy she lost?

Perfect for fans of THE FIFTH WAVE and the Body Finder series, THE REPLACED is both chilling and explosive, with creepy, otherworldly elements and twisty, psychological thrills that will have you questioning what exactly it means to be human.

THE TAKING was a fantastic read for me-- I have a hard time getting into sci-fi, and it gave me just enough of that element that I could enjoy it-- and so as soon as THE REPLACED hit the shelves earlier this year, I went out and got it. I devoured this book because, like the first one, it was the perfect amount of contemporary relationships and sci-fi aliens and abductions, as well as an ever-present aura of mystery that surrounds Kyra and her situation. It's not one of those sci-fi stories that throws you into a world and leave you with questions and things you don't understand, which is something that I appreciated, and the characters always feel very real in this series.

THE REPLACED was everything I had hoped it would be, from the intra-character relationships to the suspense, and the emotional chunks that left me in tears. There were some points in the story about which I would like a re-write because certain things were just too unfair, but that aside, I give this one four stars, with an antsy wait for the conclusion.

If you like alien abduction stories, or sci-fi, or even if you're like me and have a hard time with sci-fi, this is a book for you. Also, if you like THE BODY FINDER, you'll like this series as well. It's the same writing style, same detail and writing talent, just with a bit of a different storyline.