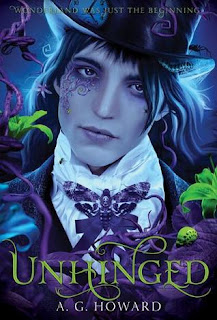 Description from Goodreads: Alyssa Gardner has been down the rabbit hole and faced the bandersnatch. She saved the life of Jeb, the guy she loves, and escaped the machinations of the disturbingly seductive Morpheus and the vindictive Queen Red. Now all she has to do is graduate high school and make it through prom so she can attend the prestigious art school in London she's always dreamed of.

That would be easier without her mother, freshly released from an asylum, acting overly protective and suspicious. And it would be much simpler if the mysterious Morpheus didn't show up for school one day to tempt her with another dangerous quest in the dark, challenging Wonderland-- where she (partly) belongs.

As prom and graduation creep closer, Alyssa juggles Morpheus's unsettling presence in her real world with her trying to tell Jeb the truth about a past he's forgotten. Glimpses of Wonderland start to bleed through her at and into her world in very disturbing ways, and Morpheus warns her that Queen Red won't be far behind.

If Alyssa stays in the human realm, she could endanger Jeb, her parents, and everyone she loves. But if she steps though the rabbit hole again, she'll face a deadly battle that could cost more than just her head.

After reading and loving SPLINTERED, I had to read book two, and I was so pleased with the continuation and the fact that the story didn't go downhill. It's always nice to see that, especially when sequels-- to me-- generally aren't as good as book two.

UNHINGED was such a fun read. Being thrown back into Alyssa's Wonderland was like leaping into the arms of an old friend, and the adventure that ensued in this book was so much fun to tag along with that the last page left me pining for book three. I think my most favorite thing about UNHINGED was getting to see Morpheus outside of Wonderland-- seeing him navigate high school with his general cockiness, driving Alyssa nuts. I always enjoy the idea of taking a character out of their normal, every-day setting element, and dropping them into another, and that is exactly what happened here. Many thanks to A.G.

I would give this one 4.5 stars, and recommend it to anyone who enjoys retellings, especially retellings on the darker side. Also for anyone who loves Alice in Wonderland, this is a fresh, new perspective on the world and story we've come to know, and it's interesting to see the differences and similarities from the original to UNHINGED.