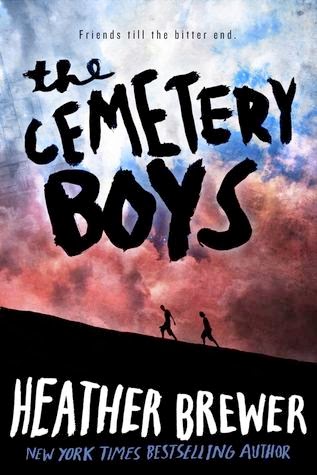 Description from Goodreads: When Stephen is forced to move back to the nowhere town his father grew up in, he's already sure he's not going to like it. Spencer, Michigan, is like a town straight out of  a Hitchcock movie, with old-fashioned people who see things only in black-and-white. But things start looking up when Stephen meets the mysterious twins Cara and Devon. They're total punks-- hardly the kind of people Stephen's dad wants him hanging out with-- but they're a breath of fresh air in this backward town. The only problem is, Cara and Devon don't always get along, and as Stephen forms a friendship with the charismatic Devon and something more with the troubled Cara, he starts to feel like he's getting caught in the middle of a conflict he doesn't fully understand. And as Devon's group of friends, who hang out in a cemetery they call The Playground, get up to increasingly reckless activities to pass the summer days, Stephen worries he may be in over his head.

Stephen's fears prove well-founded when he learns of Spencer's dark past. It seems the poor factory town has a history of "bad times", and many of the town's oldest residents attribute the bad times to creatures right out of an urban legend. The legend goes that the only way the town will prosper again is if someone makes a sacrifice to these nightmarish creatures. And while Stephen isn't one to believe in old stories, it seems Devon and his gang might put a lot of faith in them. Maybe even enough to kill for them.

Now, Stephen has to decide what he believes, where his allegiances lie, and who will really be his friend in the end.

Being a big fan of THE CHRONICLES OF VLADIMIR TOD and THE SLAYER CHRONICLES, when Brewer released a new book, I had to have it. So I grabbed it at a bookfest and read it on the way home. It made for a slow, slow trip.

CEMETERY BOYS was too... bleh. There was a lot of cliche peer pressure, as well as the typical do-anything-to-fit-in element, and the way it combined into a mystery/thriller/almost-horror seemed fairy tale ish. I didn't feel that the story was meshed very well when it came to integrating the urban legend and everything that came with that, nor did I feel like the climax was much of a climax. In fact, I lost my intrigue about a third of the way through the book, but I read on in hopes that it would get better. In addition, the ending? I had dismissed the end-game "bad guy" at the beginning of the book, thinking it way too obvious, and when the big reveal came about, I felt like I'd been robbed of a good OMG moment. Also for me, I didn't like any of the characters.

What was probably the most important thing to me was that I read Brewer's books because I know they're going to be clean, and while this one wasn't filthy, it definitely crossed a line that Vlad and Joss (VLADIMIR TOD and SLAYER CHRONICLES) never did. This is something that really saddens me, as Brewer's books had always been a bit of a safe place for me when it came to reading-- I knew wouldn't ever come across something inappropriate in those books. Now, I can't say that anymore.

I would give CEMETERY BOYS one star, and I'm sad to say it, but I wouldn't recommend it to anyone.

Am I the only one that felt this way?

(Un)Happily,
Stephanie
Posted by Unknown at 7:30 AM