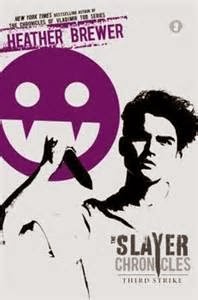 I have been eagerly awaiting Third Strike, and finally it's here and I've finished it and... *sigh* It's review time.
Joss McMillan is in a pinch. Thanks to the family gathering going on at his house, he's forced to share the same space as his cousin Henry, who hates his guts for driving a stake through the chest of his Vampire best friend. Not to mention that since a Vamp killed his baby sister, Cecile, his mom and dad have been distant and unreachable. His Uncle had introduced him to the world of Slayers and Vampires, and took the time to train Joss so that he could excel as a Slayer. Now Joss has received a mission from the Slayer Society to hunt down the murderous vampires in his home town, without the help of his Slayer Family. The only connection he has with the Society is his friend Paty, but she's been instructed not to assist him in any way; only to collect his reports and get them back to the Society. To make things harder, Joss and Henry's parents decided that they should work out the bad blood between them, and have arranged for Henry to stay with Joss and his parents for the summer.. Now Joss has to Slay the Vamps AND watch out for the safety of his cousin, who won't let Joss go anywhere alone. All the while, Joss has those recurring nightmares about Cecile, with dark, bottomless eyes and vampire fangs coming from her beautiful, innocent face. It's a tough job, made even harder by the twists and turns of the plot.
If you've read my review on Second Chance, then you know that Heather Brewer is one of my favorite authors, and I've read all of her books from the vampire world. Well, this is the last book in the series, it's the conclusion book, and due to Auntie Heather's instructions, I read the acknowledgements. Thank you, Heather Brewer, for making me cry before the book even began.
All the secrets are revealed, all the questions answered, and though the biggest question of the series "Who killed Cecile?" Wasn't a shock to me, it may surprise you. I was surprised at the ending of the story, I mean, very surprised. Caught me so off guard, I wasn't expecting anything even close to that! But as for who killed Cecile, I had it pegged.
I give Third Strike five stars, because, as for conclusions go, it was perfect. It left you with a question at the end, but the best stories always leave the reader to truly decide how the story ends. I would recommend The Slayer Chronicles to anyone who like vampire stories, but I encourage you to read first the Chronicles of Vladimir Tod, which is the sister series to the Slayer Chronicles.
Posted by Unknown at 11:25 AM