Book Review: Across the Universe by Beth Revis 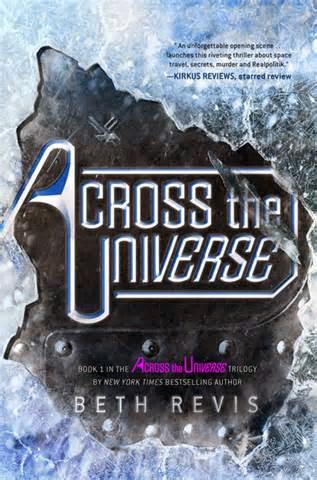 This was one of two books recommended to me by a good Blogger friend of mine, and if I'm completely honest, it started out good- made me cry on page 8. Literally- But then after a few chapters I lost a little interest. It's sci-fi, and I was being introduced to a whole new world aboard a spaceship, but I kept reading and sure enough about three chapters later I was hooked.
Amy is frozen. That's right- frozen. Her parents were recruited to be cryogenically frozen for 300 years, and stored on a space ship that would take them to a new planet, where they will be woken. Amy didn't have to go with them- she could've stayed behind with her boyfriend and lived her life- but she couldn't bear the thought of being separated from her parents. So she chose to be frozen, too, and now she's waiting for the day she wakes up.
Elder is the only boy his age aboard the ship, and he's training to be the next leader of the people on it. He knows that his mentor, Eldest, is hiding things from him, but he doesn't know what they are, or how to find them out. Life on the ship is easy, but Elder needs more- he needs the stars. Soon enough, he figures out that there are more secrets on this ship than he ever would've thought to be true, and he has to uncover them.
When Amy wakes up, the new planet is far from her- someone woke her up early, nearly killing her, and she needs to find out why. At the same time, she has to protect her parents- still frozen and waiting.
Elder and Amy band together to solve this mystery, and at the same time, keep themselves grounded- or... as grounded as you an be when you're floating through space.
I was majorly shocked when all the curtains came down and the perp was revealed. I only expected half of what happened, and the other half continued to catch me off guard, chapter after chapter! If you love a good futuristic, sci-fi trilogy, this is for you!
I desperately need book two. Thanks, Matt, I really enjoyed it!
Posted by Unknown at 10:10 PM