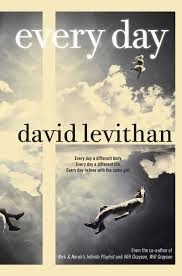 I don't know where I first saw the blurb for Every Day, but I wanted to read it so badly. So after I finished the stack (That since then has reformed into a stack much more monstrous than it previously was) I ordered the book. That was about two months ago, and I just read it today.
A isn't your normal teenager- He spends each day in a different person's body. Usually he lives their life exactly the way they would, using their memories as guides, but today is different. Today, A woke up in Justin's body, and today, A fell in love with Justin's girlfriend, Rhiannon. Normally, A tries to stick to his rules of not doing anything that could change the course of the person's life. But Rhiannon has him all shook up, and he decides not to stick to his plan. He knows he should stay away, but he can't even as he travels through different bodies. It's dangerous- he can't slip up, he can't do anything to give away his secret, but what if telling her is the only way for them to be together?
I honestly was not a fan of this book, so I was disappointed after waiting and wanting to read this for so long. I didn't like the multiple times that gay/lesbian support was brought up, and I didn't really care for the way he went about possibly trashing people's lives just to see this girl. He could've gotten so many of the kids whose bodies he inhabited into trouble, just because he was selfish in wanting to see Rhiannon again. I would give this book a two of five stars, and I would recommend it to those who like unique love stories.