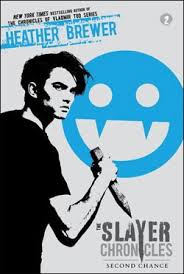 I want to start this review off by doing something different: I want to rant and rave about Heather Brewer.
Years ago, I read The Chronicles of Vladimir Tod: Eighth Grade Bites, and I fell in love with that world. I read every book that was already available and eagerly awaited those that were yet to be released. I wanted to be a vampire so badly. And then when Twelfth Grade Kills came out, the perfect world I'd lived in for so long came to a close. I thought I'd never get to be a part of that world again.
But then the Slayer Chronicles came out, and I got to experience "Life from the other side of the stake" as the tag line goes. I remember when the second one came out, I was supposed to be spending time with my cousin, but there was no way I was taking my eyes from that book. I ended up spending her entire visit on the front porch swing, reading that book.
Heather Brewer is an incredible author. Her books aren't three inches thick, they aren't difficult reads, and there's nothing vulgar or sexual in any of the seven books based in Vlad's world. I haven't read any of her books from her other series, though I do own Legacy of Tril, so the above statement is solely taken from the one's I have read (Her other books may be the same way, but I haven't read them to tell you). The picture Heather paints with her words and the story line of her books is just incredible. She's so talented, and she's an author that actually cares about her fans (or Minions, as we're referred to).
That being said, with the last book in the Vampiric world I've come to love being released, I decided to reread the last book in the series, Second Chance, to refresh my memory.
Second Chance is book two in the Slayer Chronicles series, and it's all about Joss McMIlan, the invisible boy; the vampire slayer. Joss' sister Cecile, was murdered by vampires, right out from under his nose, and he'd been so scared that he'd done nothing to try and help her. He blames himself for not protecting her, and once his Uncle Abraham recruits him into the Slayer Society, he finds a way to get revenge and search for the monster who took his precious baby sister's life. After learning the trade in the first book, and taking an illegal, private job over the summer, Joss is called to Manhattan to help his Slayer family dispose of a fanged serial killer, but once he gets there, he discovers that the Society knows about the private job he took, and they doubt his loyalties. To prove himself, Joss has to take the lead for this job, making all the decisions for the team, taking the falls, and celebrating the successes. It's something he's never done- something he wasn't even sure how to do- but it's the only way to make everyone see that he could be trusted, so he accepts the position and takes on the challenge. As he searches for the killer, things are uncovered that make the task even more difficult than it already was, and when a strange being keeps showing up, giving Joss clues and hints, he starts to wonder who he can really rely on, and who's just playing with his head.
I loved the book just as much as I loved the other Chronicles books, and I wouldn't change a thing about them. If you're a vampire enthusiast, these are good books for you- it's not necessarily your typical Dracula type vampire, and the stories are set in our modern world. These are some of the best books I've read, and I have nothing bad to say about any of them.
If you haven't read any of Heather Brewer's books, I strongly suggest- no, I URGE you- to go out and pick up a copy of Eighth Grade Bites. Just look for the cover depicting a boy wearing a black hoodie with a Vampiric smiley face on the front. It's a great world to delve into.
Posted by Unknown at 9:02 PM