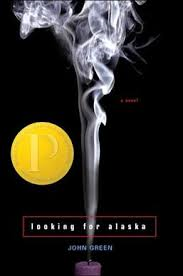 After falling in love with not only the story line, but John Green's writing style as well, of The Fault In Our Stars, I picked up Looking for Alaska. I was told by many people how great this book was, and I was excited to start.
I get that most teenagers nowadays are all about drinking and smoking and sex, but geez- almost the whole book had SOMETHING to do with one of those three things. I skipped so many pages due to vulgarity, and I was shocked. If that's what you're into, if you like that type of behavior, and support it, then this is a book for you, but I don't agree with it, which was a major reason that I didn't like this book.
The first half of Looking for Alaska was about a boy named Miles who leaves his public school in Florida to go to a boarding school in Alabama, looking for a Great Perhaps. At this new school, he immediately falls in with a group of friends, something he never had at his old school, and his life changes. His new friends include his roommate, known as the Colonel, and the sexy, mysterious, Alaska Young. In this part of the book, Miles becomes close with these kids, and discovers his feelings for Alaska. Along the way, Miles goes from the innocent, do-good kid, to the kid who smokes and drinks and has sex just like the Colonel and Alaska. To sum up the first half of the book: leaves home, goes to new school, smoke, cuss, smoke, drink, cuss, cuss, smoke, drink, smoke, pull pranks, drink, smoke, hook up, smoke, smoke, make out, smoke, drink. In the second half of the book, the sexual scenes cease, but the rest continues. The book is separated into two parts- the first being before the death of a character, the second being after the death- and while the first half is about Miles fitting in and finding himself, the second half is about the group of friends searching for answers about their friend's death.
Where is the "Don't change yourself for other people- Be you"? Because Miles changed his entire self t be like his friends. He picked up smoking and drinking just because his friends did it, and if they could do it, so could he. What does that say to teens? Be who your friends are, not who you are? Don't stand up for what you believe in? Go along with everything your friends do, and join in?
I wanted to put this book down multiple times wile reading it, but since I already knew which character was going to die -Thank you, Spoilers!- I had to find out what happened. It did keep me laughing, though, which is why I gave it two stars instead of one. I wouldn't recommend this book to anyone.
If you loved this book, then I respect your opinion, but I was just honestly disappointed with it. The language and behavior was not my forte, and I hope the rest of his books aren't like this. Again, this is just my personal opinion.
Posted by Unknown at 5:44 PM