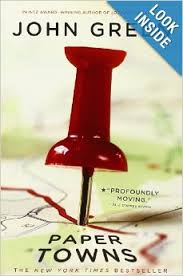 There are some books that lodge themselves deep inside your heart, and you can't point your finger on WHY. That's this book for me.
Paper towns is about a boy named Q, who is in love with the girl next door. He hasn't spoken to her since they were eleven, though- the day they found the dead body in the park. He admires her from afar, until one night, weeks away from Senior Graduation, Margo shows up outside his window and wants Q to come with her on an adventure. After a night of pranks, Q thinks that maybe they'll finally be friends again, and maybe he'll have a chance with her. But that all changes when Margo runs away and stays away for longer than usual. Margo is famous for her runnings away- a trip to Mississippi, breaking into Universal Studios- and she always leaves clues for her parents to find out where she is, though they never try. This time, Margo leaves the clues for Q, and as he uncovers them, he finds something that leads him to believe that she's going to commit suicide. The race is on to find her- dead or alive- at any cost.
Paper Towns could be said to have multiple themes- accepting people for who they are, for example- but I think the thing I will take most out of the book is the main focus, which is an element that lasts throughout the book. No spoilers, but it's about the way we see people.
I really enjoyed this book, in spite of the language and not unfrequent sexual inuendos. I laughed so hard while reading it; the humor was great.
I would recommend this book to John Green lovers, and people who want to read a mystery that's not only suspenseful, but prolific.
This is going to be a short review, because as I can't figure out what it was about this book that I loved so much, I don't have much to say. But I can say this: Give the book a shot, because you (like me) will be very surprised at what you will find.
Posted by Unknown at 7:18 PM