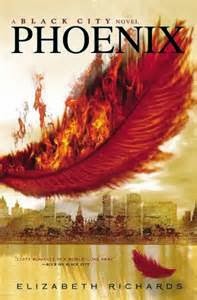 Natalie and Ash are back again after the stress of their previous feats from Black City (No specifics, don't want to spoil anything) and things are more dangerous than ever. Plus, they're engaged! Dictator Purian Rose has proposed a new law- one that, if voted for, will mean a concentration camp called the Tenth for the Darklings. To make it worse, Rose threatens Ash, saying if he doesn't vote in favor of this law, he'll have Natalie killed. After choosing not to exile his fellow Darklings to the Tenth, Ashe knows Natalie's in constant danger. Elijah, the bastet boy Natalie had rescued from her mother's experiments, suggests they travel to find a powerful weapon known as the Ora, which could be their only hope in defeating Purian Rose once and for all, and they decide it's their best chance. Ash, Natalie and Elijah set out on this quest, a love triangle forming, to find this weapon and save their country.
A fantastic continuation of the story, Phoenix pulls on the heartstrings many, many times. The characters undergo some major situations, and their responses are always intriguing. The story had me on edge for a while, but I enjoyed every minute of it! I have to say, I was wondering from a quarter of the way in what Natalie's situation was, and now that I know for sure it's killer not to have the third book, especially since the book ends in a CLIFFHANGER! Dun, dun, dun!
I would recommend this book to those who liked Black City, because it's the second book, as well as any who like dystopian/teen romance books. It is a trilogy, and WINGS, the final installment, comes out in June 12, 2014. Will time please speed up?
Posted by Unknown at 4:40 AM