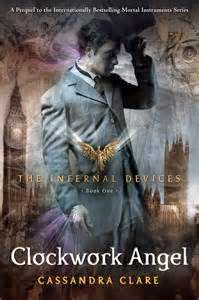 I started Clockwork Angel by Cassandra Clare with high expectations in mind. I read and loved The Mortal Instruments more than most YA series, and it's probably my favorite series to date. Also, The Infernal Devices get quite a lot of hype from readers on Twitter. So I dove into Clockwork Angel ready to be amazed. Shockingly, I wasn't.
The storyline follows sixteen-year-old Tessa Gray. She moves to London from America to be with her brother, Nate, and is captured upon arrival and held against her will by two magical creatures called Warlocks. The Dark Sisters, as the creatures called themselves, showed Tessa that she has a power that will allow her to change into other people's skins. A shape shifter, they called her, and forced Tessa to endure this painful change on a daily basis, threatening to kill Nate, who they also had imprisoned.
One day, the Dark Sisters tell Tessa that a man known as the Magister is coming to marry her for her talents, and things are looking bleak when Will Herondale, a Shadowhunter, unknowingly rescues her from whatever had been her future. Tessa finds refuge in the home of the Shadowhunters, and they help her find her brother in a trade that she use her powers to help them find and defeat The Magister. Tessa finds a strange attraction to Will, as well as his best friend Jem, and a love triangle forms amidst the story.
I would recommend this book to fans of TMI, and if it doesn't snatch you up by the last page and leave you wanting more, to do what I'm going to do and keep reading the series. It'll perk up, I think.
This is a trilogy, and to be fair, City Of Bones started out slow also, but pepped right up in the second book, keeping my interest through the series. Plenty of time for the story to change my views. What kept me reading were the love interests, Tessa's love for reading and books, and the big question for the book: What exactly IS Tessa? I did get very animated during the big fight scene, yelling at the book and freaking out a bit- Feels running high! I will be finishing the series, though. In fact, I'm starting Clockwork Prince as soon as I hit that post button. I am excited to see where the series goes, and though Spoilers have ruined the ending of Clockwork Princess for me, I have faith that this series will be just as good as TMI