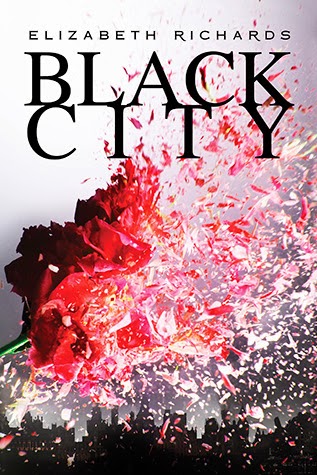 When I picked up this book in Fall 2012, I had never heard of Elizabeth Richards, but it sounded interesting and I decided to give it a shot. It was one of the best decisions I've ever made.
Black City by Elizabeth Richards is set in a post-apocalyptic era where humans are on the brink of war with the Darklings. Natalie Buchanan is the Emissary's daughter, and she's used to the big city, but after the death of her father and the maiming of her sister, her mother moves her down to live in a part of the country that isn't as fancy as she's used to. She attends school there, and tries to fit in; make friends. That's when she meets Ash Fisher, a half-blood darkling that she becomes strangely- and illegally- attracted to. If anyone finds out that they just might be more than friends, it could mean execution for them both, so they hide their feelings, desperate not only to see each other, but to keep it secret. The disagreements between the Darklings and the humans keep piling up, and eventually the two are forced to do some things that could very well end up in their deaths.
After reading Black City, I was entranced. I wanted more of this world and I wanted it now. But I waited patiently, or, you know, not-so-patiently, for the second installment. Out of all the books I've read in my life, Black City definitely had the biggest, most shocking, and unexpected plot twist I have ever experienced. It's to die for, and I nearly did. And the way she writes... I can't express my admiration enough. In a matter of days, I went from never having heard of Richards, to having a new favorite author.
I would recommend this book to anyone who enjoys YA dystopian/romance, and who loves a good trilogy. Black City is one of the best trils out there; it deserves to be read, and I promise you that you won't regret it.
Dear Elizabeth Richards,
I've been here since the beginning, and I'll stay here til the end. Forever a fan of BC <3
Posted by Unknown at 3:57 AM