Waking up on Friday after a successful Second Day of BEA was all at once energizing and devastating. Energizing because I was so ready to go and I knew the day's schedule like the back of my hand, and devastating because my feet were still so frigging sore. But I was actually very relaxed going into Day 3. I knew the layout of the showfloor, I was going to be working with the most relaxed schedule of the entire expo, and I was finally out of a dress and into a good pair of jeans. The day was destined to be great.

Getting to BEA that morning proved to be a bit of an amusing feat. Ticket drops for the signings later that afternoon were at 8am, and I didn't have any that I wanted to go for. Stephanie @ OhanaReads, however, wanted that Marissa Meyer ticket and was ready to fight for it, so she got up and went to stand in the line for tickets at 5:30.

Yes, you read that right.

I, however, chose to use those precious hours of the wee morning to get some well-needed rest. I slept as long as I could, and crossed over to the expo, meeting Stephanie in line for the showfloor, only to find out that after all of her efforts, she still didn't get her hands on a ticket. She was disappointed, and we were disappointed for her, because HEARTLESS was one of only two books that were must-grabs for her BEA experience.

But we persevered, and though Stephanie was a bit downcast, we made our way through Day 3.

My Friday schedule was super chill. The only thing I had on my list before noon were signings for THE EDGE OF EVERYTHING and CARAVAL, and I ended up not even getting to the booth in time to get a ticket for the second one. So I was just kind of milling around, checking out booths and catching random drops, when I get an all caps text from Stephanie saying that Jay was here and he had a few ARCs of NEVERNIGHT for people who came up to him and said "Never forget".

I think this is the appropriate time in the post to tell you that I am a HUGE FREAKING JAY KRISTOFF FAN.

If you'd like, you can check out my review of it.

My number one priority for the week was GEMINA. If I didn't leave with GEMINA, then there were going to be some major problems. 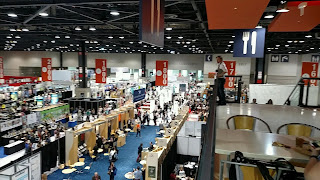 So I get this text, and immediately I'm ready to throw my schedule in the trash and look for Jay. At that time, I'm in the beginning of a gap between drops/signings on my schedule, so I dedicated my time to looking for Jay. I figured, how hard could it be? HE'S A GIANT AUSSIE. I'm looking all over the showfloor, but I'm not finding him, so I send my mom to check out the other half of the floor while I head to the cafeteria on the top level of the center to look for him from a bird's eye view. Stephanie was already up there and we proceeded to spend the next hour looking for Mister Kristoff. at this point, we both had things we needed to get to, so we headed downstairs and ran around following the schedule, which included drops of THE SUN IS ALSO A STAR and ONE PARIS SUMMER, which I a-d-o-r-e-d.

The GEMINA drop that I mentioned before, it wasn't until three. But if you went to BEA, you know why I got there at 1 and went to scout out a line. If you haven't ever been to BEA, let me tell you this: Major Books/Authors Have Lines That Make You Wait for Hours and Hours. I was actually at a Penguin signing (David Arnold's KIDS OF APPETITE), which was at the same booth at the GEMINA signing would be, and after my mom went and picked up a copy of THREE DARK CROWNS (THE JEALOUSY FACTOR IS UNREAL) she went to find the GEMINA line, which was already of a good length, while I waited for KOA. My mom managed to let people in the line know that two more of us would be coming in like two seconds, and we were golden.

I want to take the time to mention that the KOA signing was not the first time I had met David Arnold. I met him last year at Anderson's Literature Conference and had the privelidge of sitting at his table for the first day. Such a pleasant person to have a conversation with, very friendly, and I always remembered the MOSQUITOLAND author as a nice person to engage with. Flash forward to BEA, when I stepped up into his line, and he looks and says "I've met you before." and I told him that he was right, that wed met at Lit Con, and this was easily one of the hilights of my BEA experience, simply because, as a small blogger, you don't get recognized that often, and it's such a great feeling to have someone remember who you are. I've had this happen with four authors, and each time it's just the most amazing thing.

Anyway, by the time I get done with the KOA line, the GEMINA line is already going crazy. I took my spot with Mom, and soon after that Stephanie joined us. Pretty quickly after that, Bayram @ NeverEndingBooks made his way over to the line and jumped in with us. We spent the next two hours chatting and running to drops, until Bayram and I were heading to a Disney drop when I nearly ran into this hulking monster of a man. I look up, and it was jAY FREAKING KRISTOFF.

My brain about exploded.

And at this point, Bayram and I are just starting ot get to know each other, so he doesn't know how big of a fan I am, but I just turned to him and was like "IT'S FREAKING JAY KRISTOFF." and he, ever so chill, goes "Oh yeah, Stephanie told me you were a big fan of his."

AND I NEARLY EXPLODED BECAUSE JAY WAS RIGHT THERE AND SO MUCH EXCITEMENT.


But he was signing an ARC of NEVERNIGHT *Cue mental screaming* so I didn't want to bother him while this other girl was having her moment, so I went to the drop with Bayram and by the time we got back to where he was (Thirty seconds, tops) Jay was gone. So we're looking around, spinning and searching so hard, and finally I see him halfway across the showfloor. 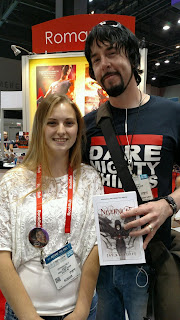 So I just... I kind of... I totally sprinted. I booked it over to him, and it was such a problem because one stride for him is like three for me and so I felt like I was in track by the time I got to him, but God is good because another girl stopped him just as I was closing in, and I didn't have to run anymore. So he looks over at me while he's talking to this girl, and I'm like "I think I have a password for you." And just as he put the marker to this girl's book, we get swarmed. I mean, these bloggers were like frigging bees. Nowhere in sight, and then all of a sudden THERE'S A HOARD OF THEM. *ironic laughing bc I'm a blogger* So he gives this girl her book, she stands back, and then pulls out what he admitted was his second-to-last ARC left in the bag, and asked me who he should sign it to. So I'm talking to him, full on shaking, and I ask for a picture, of course, and he obliges. So I go to give my phone to the girl who had just gotten her ARC, since she offered to take it, and then I have to sit there and struggle with the phone because my hands were shaking so badly I couldn't unlock it.
Eventually, though, I got it done and left Jay to his other fans while I went back to the line and screamed and shook as I marveled over the ARC and retold the story to my mom while Stephanie went to go see if he'd given away his last ARC. 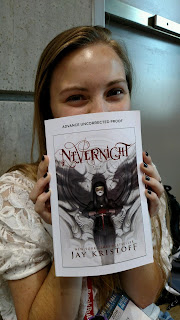 Sometimes around here, our friend Eli @ The Silver Words joins in, and the madness begins. The line. starts. moving. And we have GEMINA in our hands after two hours of waiting and I'm totally not crying over it and that was how we ended our showfloor time.

Something I forgot to mention earlier is that Bayram was in line for the HEARTLESS ticket drop as well, and he didn't manage to get a ticket either. But something miraculous happened that afternoon. Not only did someone give him their ticket, but someone also gave Stephanie their ticket! after such a crazy wait, they ended up getting exactly what they wanted!

From there, we went up to the room and hung out for about an hour before heading over to a local sports bar for a BEA blogger meet-up, hosted by Octavia @ Read.Sleep.Repeat. and Whitley @ Reading With A Vengeance. This was such a fun way to end the evening, as getting us all together resorted in so much bookish fun and card swapping. It was a great way to get to connect with the other bloggers, swap stories, and get the low down on what BookCon was going to be like, since I'd heard nothing but horror stories.

Also, I'd just like to make it known that I took my heels off for this dinner. I wore flip flops instead.

At the end of that day, we were ready to just go to sleep. The exhaustion was real, and after we got back to the hotel, that's exactly what we did. We went over the schedule for Saturday, and then completely... passed.. out.

Stay tuned for the tales from BookCon, coming at you next Wednesday.