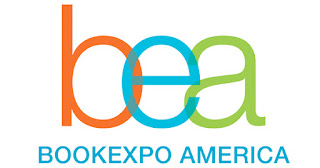 Today's post holds my wrap-up for day two of my BEA adventures. Last week, I detailed out my first day of BEA 16, AKA my first-ever BEA experience, and if you haven't checked out that post yet, you can do so by clicking this link.

The first thing that happened with my second day of BEA is that I woke up and immediately realized that my feet were STILL sore. Seriously, people tell you that your feet are going to hurt, but you don't think YOURS will, because you're used to walking for eight hours in your black leather boots with a two inch heel. But let me tell you a thing: IT HAPPENED. THE PAIN WAS REAL.

Day two was interesting in that, though there were many more people than the day before, it was ten times less stressful. Because we'd pretty much gotten the layout of the show floor and a feel for the way things worked on Wednesday, we had a pretty good idea of how to handle Thursday, which ended up being a bigger blessing than we realized at the time.

For me, Thursday was a super busy day, but it was also a great day in terms of hauls, because whereas most people had to catch a flight and were forced to limit what they picked up, I would just be driving back to my house at the end of the week. So my schedule was super packed. Sometimes, I had three to four signings or drops going on at the same time, and I'd have to choose between them, but I was fortunate enough that my mom has a lot of the same tastes as me, and if there was something that  I wasn't going to be able to get, the odds were that Mom wanted it too, and would go get a copy. 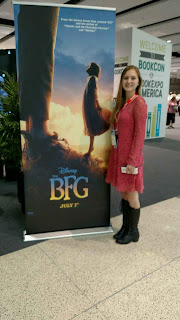 Upon making it to the convention center, I immediately made my way over to The BFG booth. I'd taken a picture with the standee the day before, but I took another one after talking with the gals at the booth, because The BFG is a very important book in my life. If you'd like to find out what it is that makes the BFG so special to me, check back with me on July 7. You can find out all about it, and maybe even find yourself with an opportunity to enter a giveaway.                                                                                           First thing that morning, I made my way to Macmillan, where Kristen Simmons was signing METALTOWN. When I got there, they had already run out of tickets, so I changed directions and headed to the BOOKISHLY EVER AFTER signing, where I managed to get a copy of the book and tell Isabella how excited I was for her debut. From there, I went for RESURRECTING SUNSHINE and THE WOMEN IN THE WALLS, an upcoming YA horror novel that has me salivating at the thought of reading it. 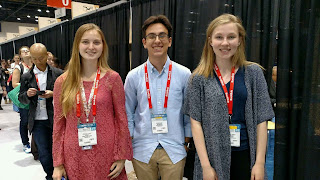 After that, I had an hour and a half gap between items on my schedule, so I used the time to make a quick check-in with Stephanie from OhanaReads and grab lunch. Thanks to the group chat Andye set up for us, we actually found out that one of the bloggers we'd been talking to a bit was in the line that Stephanie was heading to. So we got to meet Bayram from NeverEndingBooks, who actually ended up being our line buddy for nearly every line for the rest of the show. 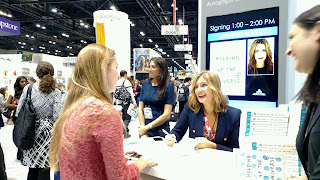 After lunch, we made our way to Jennifer Niven's signing of HOLDING UP THE UNIVERSE, A Revelation. And from then on out, my mom and I perused the booths and drops, managing to pick up my most anticipated grab of the day, GILT HOLLOW by Lorie Langdon. This is a mystery/suspense book that comes from Blink later this year. 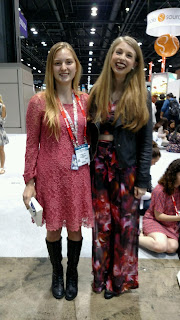 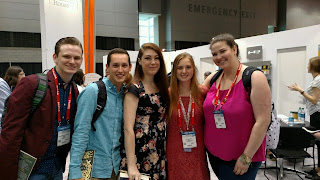 After HOLDING UP THE UNIVERSE, we walked around the corner to put our books in our bags when I saw the Booksplosion crew just casually hanging out in line and talking to Ransom Riggs. Earlier that morning, I'd managed to get a picture with a bunch of the guys and gals from the Booktube community, but I had missed Christine Riccio, and some of you may know that Christine is my FAVORITE Booktube person (Jessethereader comes close for second). So as we put our books in our bags, I decided to use my small time gap to wait for the crew to finish their talk with Ransom before I snuck in and asked for a picture with her. We probably waited a good ten minutes, because Ransom wanted pictures with them too (Duh. Booksplosion Crew.) but IT WAS WORTH IT because I came away having met Christine and gotten THIS LOVELY THING. In case some of you aren't as familiar with the Booktube Community, the above picture features Tiernan @ TheBookTuber , Jesse @ Jessethereader, Kat @ Katytastic , and Whitney @ WhittyNovels 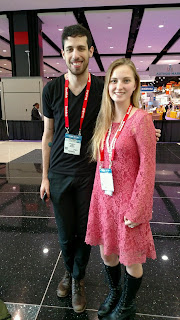 By the end of the day we were starving, with sore backs, doubly sore feet, and two suitcases full of books between the three of us. But we'd had a fun and productive day, and on our way out we ended up seeing Adam Silvera. Of course, I stopped to get a picture with him since I hadn't managed to make it to his signing line earlier that day, and wanted to say hello after having met him for the first time at NTTBF.

We ended our night with a trip to Giordano's for that famous Chicago-style pizza, and came back to the hotel to check out each other's hauls and hash out the schedule for the next day. My top grabs for the day was GILT HOLLOW, which I am over-the-moon excited for!

The best part of the night, though? Taking off those shoes.