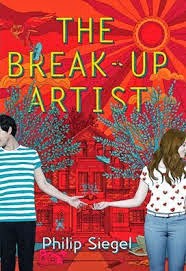 So there's this tour of authors going around the Midwest (Hallelujah, praise the Lord!) (The Mighty Mississippi Book Blast See the Tumblr Page Here!)and I encourage any of you guys out there that live in or near the tour cities to go! Maybe I can meet some of you :) So anyway, I went out and bought a stack of books of the authors that I didn't already own books of, and the first one I started was The Break-Up Artist by Philip Siegel.
The Break-Up Artist is about a girl named Becca who doesn't believe in true love. Or any type of romantic love, for that matter. In fact, she runs a business where people pay her to break up couples from her school. This business is anonymous though, and no one knows it's really her, so everything works out. That is, until Becca is hired to break-up the school's power couple, which consists of her ex-best friend, Huxley and her star football played boyfriend. In order to make this a win, Becca will have to get back on Huxley's good side, as well as doing some major sabotage to get the job done, and in turn, keep her identity a secret. In the meantime, Becca has to deal with the feelings growing inside her for her new best friend's super cute boyfriend, and give a little bit more thought to her outlook on life.
This was a great book, and I loved the concept, but what I enjoyed most about the book was how much it made me think about my best friend, and how I don't know what I'd do if we ever parted ways. Really makes you think about what you have, and how much you take for granted. This is one of those books that sucks you in and takes you on a roller coaster of emotions! I give The Break-Up Artist a 4/5 stars, and hope you snatch it up the next time you see it!
Posted by Unknown at 3:58 PM