Book Review: The Art of Lainey by Paula Stokes 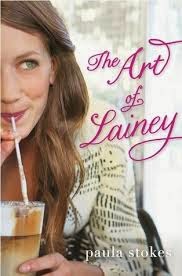 So I was told by a bloggy buddy that I was going to love this book, and now that I'll be attending a stop on the Mighty Mississippi  Book Blast tour, I went out and bought the books I'd need to read. Lainey was one of them, and I have to say that my bloggy buddy was right. I absolutely adored this book.
Lainey has the perfect life. She's popular, she's the star of her school soccer team, and she has the best boyfriend she could ever dream of. Until he dumps her in her parents' coffee shop, right in front of everyone. Lainey is determined to get him back, and with the help of her best friend Bianca and a Dead Chinese Warrior's strategies, she's sure to succeed. But in order to do so, Lainey persuades her co-worker, Micah-- a punk-rock kid with tattoos and piercings and a mohawk-- to pose as her boyfriend. But maybe having Micah as a pretend boyfriend just isn't enough, and maybe, just maybe, Lainey's world is about to turn upside down.
When I finished this book, I couldn't stop smiling for quite a while. It was just one of those books that you read and can feel happy and giddy about. Though, as Paula knows, there were some instances where a strangulation may have been warranted. There were a few sexual innuendos, but I was pleased with the lack of them, which is why I have no trouble giving The Art Of Lainey a 4.5/5 Stars. The wit and humor were fantastic, combined with the friendship and romance, and the way the spirit of a seventeen year old girl was captured, made for a spectacular read! I was highly impressed! Cannot wait for the prequel novella, coming out in August, from Micah's perspective!
Posted by Unknown at 3:58 PM