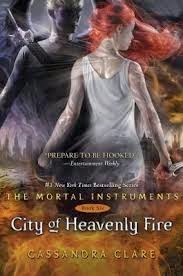 Need I give this book an introduction? If you've immersed yourself in Cassandra Clare's writing before, then you were probably hooked immediately. And from then on out you (Like me) probably binge read every book you could find of hers. And IF you did that, then you waited, and waited, and waited for May 24 so that you could find out what happens in the highly anticipated conclusion to the Mortal Instruments series. I too counted down the days, and saved up money, and drove my family and friends crazy with my theories and excitement. When I bought my copy, I nearly killed myself from holding it and not being able to start it. But I had a reading buddy and we were going to read this one together. And we did. It made the book last so much longer than it normally would've, and I enjoyed every second of getting to fangirl with someone who I knew was on the same page with me. Literally. Thanks for that experience, Wishes (Follow him on Twitter if you'd like, @TitansonFire)
We were left off in CITY OF LOST SOULS with Jace having the Heavenly Fire inside of his body, preventing him from touching people for very long without burning them. Seb was still on the loose, probably cooking up some sort of evil plan, and all ships but Malec were intact. CITY OF HEAVENLY FIRE gives us everything we need to be satisfied with an ending to our beloved Mortal Instruments. This conclusion follows our Lightwoods, Fairchilds, Herondales, and Morgensterns, as well as our favorite Downworlders, on their mission to do what needs to be done to track down Sebastian and get things settled once and for all. That's all I'm going to say about it, as I don't want to spoil the book for anyone, but if you have already read it and want to talk about CoHF, you know where to find me!
CoHF is unlike any finale book I've ever read. Not one page, not one sentence, was I bored and thinking "Come on, when is something good going to happen?" The twists and turns in this book were incredible, and once again, the attachment Cassie made me feel to some of the characters was stronger than is probably healthy. Everything gets turned upside down in CoHF. Like... everything. Ships sink, lives are lost, tears are shed, laughs are released. And may I add that Alec is downright hilarious in this book? Because he totally is. You're lying if you disagree. Ten of five stars to the beautiful book that is CITY OF HEAVENLY FIRE, and a round of applause for Cassie. Never have I read such an engaging series. Thank you Cassandra, for giving the YA world this extraordinary gift that is TMI.