A couple weeks ago was the University of Central Missouri's Children's Literature Festival. In a nutshell, it was a gathering of (mostly) middle grade authors who participated in a luncheon, panels, and autographing sessions.


Of course, as soon as I found out about this, I knew I had to go. I immediately made plans with a friend to go, but as the days drew nearer, said friend became unable to come. This meant that I had an extra ticket and absolutely no one to give it to. So when friends fail you, you go to family. Or, friendswhomayaswellhavebeenfamilysinceyouveconsideredeachothersiblingsforfiveyears.


Anyway, I shoot a text to my brother. It went a little something like this: 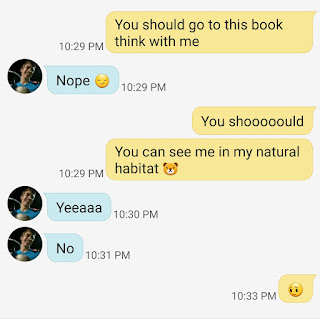 And no more was said about it. So I'm just like, "Great, I'll just go by myself, how wonderful." (my parents were coming as well, but I had really been looking forward to taking one of my non-reader friends to the event with me. And it would have been even better if my bro would have said yes, because... okay, it's not that he HATES reading, it's just that he only enjoys certain books. For instance, WWII books, good mysteries, and Civil War stories.

But he knows how much I love the bookish world, and I really thought he'd go to the festival for me. If not for any other reason than to make me happy.

The morning of the festival, I got up, started running around getting ready, making sure I had all my things in the car, and I had just sat down to check snapchat when the door opened. My mom had gone to take my pups for a grandpa-doggy day while we were gone, as it was quite a drive to UCM and we'd be there all day, and I hit replay on a snap from my dad as I felt her standing beside me.

"Look at your husband." I said.

Suffice it to say that I was totally freaking shocked to see my brother standing there. Apparently he and my mom had been conspiring behind my back, and he was going to go to the festival with us.

The drive took a few hours, but we finally got there, signed in, and hit the sales area. Throughout the day, my mom and brother swapped the camera back and forth to take pictures, so I have quite a few for you. I also used the Snapchat Story feature for, like, the first time ever, and chronicled our day, though I have been forbidden by my brother to put any pictures on the internets that include him. 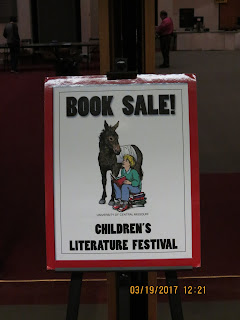 From there, we moved to stand in line for the luncheon, and they ended up letting us in super early, so we didn't have to wait long.


As we walked into the room we'd be having lunch in, we found tables with author names on a centerpiece. All attendees got to choose their seats with an author, and the first one I looked for was S.A. Bodeen. She wrote books like THE COMPOUND and THE GARDENER, and I'd been trying to meet her for five years.

Aaaaand of course her table ended up being one of the first to fill. For a moment, I stood reading table names before eventually landing on Angela Cervantes. I wasn't familiar with her works, but we took our seats at her table and actually had the most pleasant time just talking and asking her questions about her books. She gave us so much insight on the publishing industry, and even a good chunk of advice on getting agents and book deals. We ended up talking back and forth around the table for a good hour as we ate, until the guest speaker moved up to the front of the room. 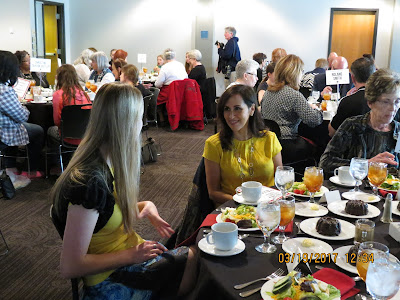 I remembered hearing all kinds of good things about the Al Capone Does my Shirts boosk in middle school, but I never had that much of an interest in them. Let me just go ahead and say that after hearing Gennifer Choldenko speak, I will be reading that series.

Her talk was about knowing what your story to tell is, and I took a video at one point because I loved what she said. It's pretty self-explanatory.


After the speaking, it was SIGNING TIME! I was pretty excited for some of these authors--even the ones I'd met before--so I couldn't wait to get started. 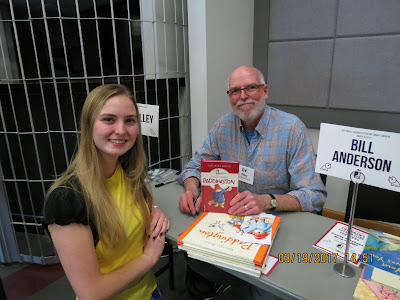 First, I found R.W. Alley. In case the name isn't familiar to you, he's the illustrator of the beloved Paddington Bear books. He had the second longest line-- second only to Choldenko-- and the wait was worth it to meet such a sweet person that took the time to sketch in each person's books, no matter how many they had (I had like 6). 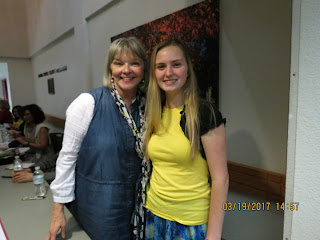 From there? Cheryl Harness. She wrote these wonderful books for National Geographic that were basically stories and collections of writings from important historical figures, such as George Washington Carter, Myles Standish, Narcissa Whitman, Daniel Boone, and my favorite president-- Teddy Roosevelt. 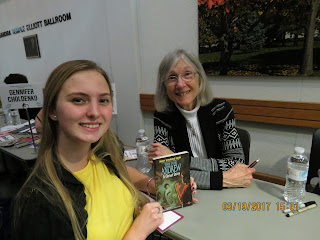 Next. Oh my gosh. Next, I met Mary Downing Hahn. I don't know if you guys were like me and spent your middle school years patrolling the library for new finds, but we were required to choose form a set of books at one point. We would read it, do a project on it, and then discuss for a grade. One year, I chose TIME FOR ANDREW. It's a ghost story for ages 8-12, and I loved it. So, naturally, I found her section in the library (I still remember exactly where it is. Follow the right wall as you walk in until you see the windows of the computer lab. Halfway down that wall starts the Hahn section, and it lasts around two top shelves.) and started at one end and worked my way to the other. I read everything my library had of hers, and TIME FOR ANDREW remained my favorite. That's why I was so excited to finally get to meet the author, who was truly lovely and became one of the hilights of the day. 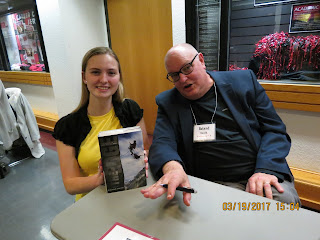 From there, I moved on to Roland Smith. I've had the pleasure of meeting Roland three times now-- twice when he came to my school for speaking events, and once at the CLF-- and he has yet to disappoint. I remember the first time we met, he signed my copy of SEA OTTER RESCUE. The second, PEAK (lovelovelove), and now, THE EDGE. It's always a pleasure chatting with Roland, and one of the things I love about it is that he doesn't just sign and send you on your way-- he actually takes the time to talk to you, and it's great.

From there, we moved on to Michael Spradlin, Roderick Towney, E.B. Lewis, and finally to the moment I'd been counting down to all day-- S.A. Bodeen.

I've been trying to meet S.A. Bodeen for a grand total of five years now. Each time, something got in the way (Last year, a surgery). But after some email correspondence, I was finally going to get to say hello. Not only that, but I was going to get to interview* her.
That's right. 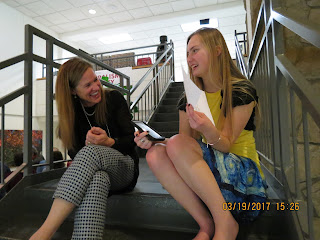 So as I found all my books to be signed, I headed for her area. I'd actually spotted her earlier, but I'd put on a pair of blinders so I could save her for last. Finally, I carried my bag down the hallway and got to meet one of my faves. Graciously, she signed the stack I had, which included allllll of her YA/MG books, and after getting everything signed, we made our way to the staircase (where it was slightly less noisy) and got down to business. The very last thing I did before leaving was find the author I'd had lunch with, Angela Cervantes. I had a copy of her first book, and wanted to end the day just as I'd started it-- talking with Angela. We'd had a great time at lunch, and I can definitely say that I left CLF with one more author friend than I'd come with. That's one of the best things about going to an event like this where you have a luncheon-- the fact that you get quality one-on-one time with an author that you might never have met before, which is exactly what happened with Angela. I do read MG occasionally, but not often enough that I'd be super familiar with a current MG author. I'm glad I took that seat at Angela's table.

With my time at the festival over, I stopped by the University of Central Missouri's trophy case to take a picture with the UCM sign to commemorate my day there. 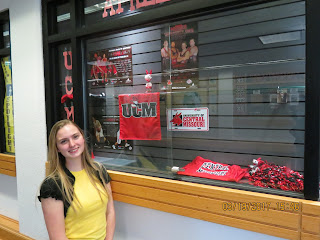 All in all, Children's Literature Festival was a great experience. I attended one of the three days, and I'm positive that the other two were just as nice. If you're ever in the MO area around March, you should definitely look into the festival. You can clinky this linky to check out the fest's webpage, and keep tabs on next year's event.

*You'll have that interview coming within the next couple weeks... Cooking up some plans over here ;)
Posted by Unknown at 5:00 AM