As many of you know from my Instagram and Twitter feed, I was fortunate enough to attend Book Expo America this year. After two years of seeing everyone's wrap-ups and hauls and photos posted to social media, I was finally able to go myself, and the excitement level was through the roof. Thanks to Octavia and Britt, I had access to all of the newbie answers I needed to prep myself, and had everything set up a week before.

And then changed my mind and didn't have my mind made up on outfits until the day before BEA.
I'm indecisive, okay?

So BEA Day One, Wednesday, started out... oddly. Stephanie Ehmann from OhanaReads had flown in the day before, and she stayed with me all throughout BEA week. We got up mega early, around 5:30 or 6:00, because a little bird told us that it was best to be at BEA around seven in the morning for the best experience. 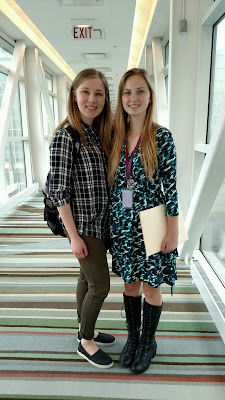 Now, remember. Neither of us had been to BEA before. 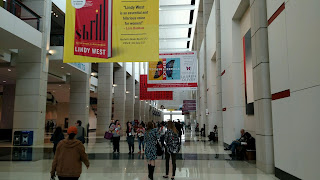 We walk in through the tunnel, take the escalator, and suddenly it's bookish things EVERYWHERE. Stand-ups, banners hanging from the ceiling, from the railings. The signs from the showfloor were visible from outside the "gates". It was the first time of the week that I was able to appreciate that so many people in the bookish industry were gathered under the same roof, all to talk about the one thing that we all had in common, no matter who we were or where we came from. 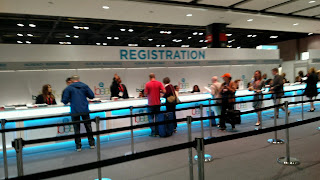 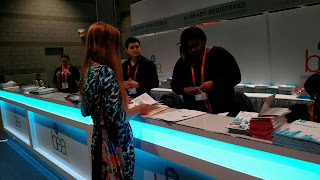 After taking a look at all of the banners and food carts, we made our way to the registration desk. We registered, and then... we had nothing to do. Literally nothing. Because the show floor didn't open until 1. So Ehmann (We call her Ehmann because it can get confusing having to say "Stephanie!" and have both of us turn to answer.) and I, as well as my mother who attended BEA as an educator (Go teachers go!) went back to the hotel room, which was s short walk due to our room being at the Hyatt Regency, which had a connecting tunnel to the convention center. So we went back to the room, hung out for a bit, memorized our schedules for the day, and then... napped. Having gotten only around five hours of sleep the night before, and Ehmann having had a plane ride before that, we were all wiped.

But of course, we woke up so that we would have enough time to Skype with Matt and discuss the pre-BEA spazzes that were going on inside of us.

At noon, we slipped back across the road to the convention center and found ourselves a place in the (very short) line to get into the show floor. There were two lines, and since we could see most of the locations of the booths from our spot, we chose the line closest to our first item on the list, which was a Harper drop. Once in our spot, we managed to pick up some food, because by that time we were ready for lunch, and we waited. 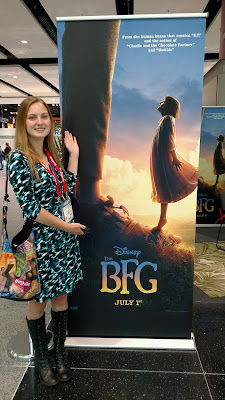 Of course, we had an hour in that line, so we visited the BFG booth, which was located near the food carts. I found it extremely fitting that the first booth I would visit was this Roald Dahl film adaptation. To find out why this was so fitting for me, and why I felt the need to take a picture with the standee, check back here on July 7th. I can't wait for you to find out. There also may be a giveaway with that post... *winks*

Well. Ehmann and my mom did.

I, however, kept it in my hand 24/7 all of BEA bc I am a major control and schedule freak.

At this point, I would like to send a big thank you to my mom for being the best mom ever by taking us to BEA/BookCon, and for taking the absolute best pictures.

Especially ones I would never think to take.

Like pictures of the line, and pictures of our view of the showfloor before it opened. See below. 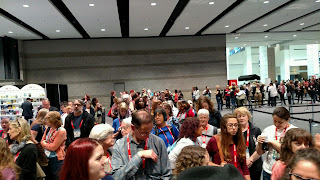 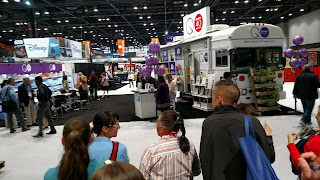 After having our badges scanned for entry, 1pm stuck and things were on. We made a beeline to the EpicReads booth, because we'd gotten intel that there was going to be a drop of REPLICA. We get there, there's already a line forming for the drop (The drop was late) and we secure a spot. And then the drop goes, and it's our first drop of BEA, and we're super excited to grab our copies of... A Middle Grade book.

Our intel had been faulty. But on the bright side, both of the Middle Grade books sounded interesting, and even if I didn't read them, I knew my mom would, because she loves Middle Grade. The next thing for us wasn't until two, so we wandered the showfloor and picked up a few books thanks to the different drops that were going on at that time. 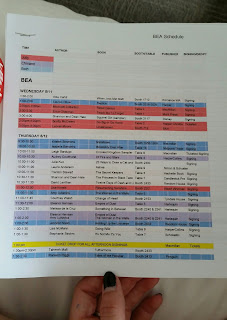 And like I said, we were all newbies. We had absolutely no idea how to handle BEA in terms of how to work drops and signings and such. But it is at this time that I would like to thank Nori from ReadWriteLove28 for making this glorious schedule and sharing it with the people. Because if not for her spreadsheet, we would have been even more lost than we already were. We took Nori's paper and added a few things to it. Color coordinated it. And printed it.

As I mentioned earlier, I'm a major control freak. ALWAYS STICK TO THE SCHEDULE!

And because of this beautiful thing (Only half of day one) I had a BEA lifeline that only failed me a couple times, when one of us had gotten the added times wrong. 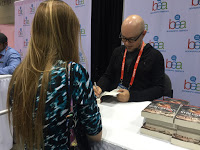 The first signing of the day was one of my most anticipated grabs from BEA-- REBEL GENIUS by Michael Dante DiMartino, AKA one of the co-creators of AVATAR: THE LAST AIRBENDER and LEGEND OF KORRA. If you know me, you know I loved both (But AVATAR was better!) so of course I had to go pick up a copy. The signing line actually wasn't that long, and Michael talked to each person for a solid two or three minutes. I was able to tell him how much I enjoyed AVATAR, and it was a great way to kick off the signings of BEA. 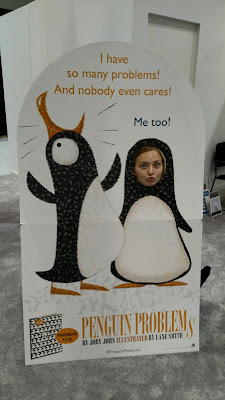 And then we stopped by the Penguin/Random House booth, where there were totes being handed out, as well as some swag and a promo standee for PENGUIN PROBLEMS by Jory John. Of course, I had to try my best to make a penguin face.

I can't even with this standee.

"I have so many problems! And nobody even cares!"

I literally spent all of BEA saying this every time something went wrong.

Now I can't wait to pick up this picture book. It has some pretty great potential. It's a book about penguins. Penguins that have problems. 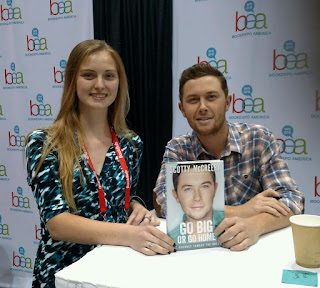 So the rest of the day consisted of drops and signings and wandering the booths. Getting a layout for the land and standing in a LOT of lines, until I found out that Scotty McCreery's line had run through it's tickets, and people were allowed to go and get a book signed even if they hadn't gotten a ticket. As soon as I found this out, I made straight for Scotty. My mom came with me, and the thing that we noticed was that most of the people in his line were middle-aged women, not teenage girls. Anyway, I did get to have my book signed. He was super quiet and super sweet, and yes, his eyes really ARE that blue in person.

We were finally at the last line of the day, and I'd brought some swagpacks to hand out-- signed bookmarks, tattoos, stickers, etc.-- and that's how I killed time the last hour. I passed out swag packs and swapped my trusty tote (Best tote, in terms of quality, came from Hachette) from one arm to another.

After that, we were done. We made our way to baggage check, where we had all three shared and filled a small suitcase. None of us knew it yet, but baggage check would be a lifesaver for BEA. By this point in the day, all of us were ready to take our shoes off and go to bed. After just four hours, I was regretting my decision to wear boots with heels, but food was set as a priority, so we ended up having dinner at one of the hotel's restaurants. From there, we went upstairs to gaze at our treasures and finalize the schedule for day two.

For a first day of BEA, it was pretty great. Had a funky start to it, but ended up being a day full of learning experiences for us, which is exactly what we needed.

My top grab for the day was probably THE GRACES. I'm super excited for that one, because it seems like an out-of-the-box YA story. A family of witches and a girl who wants to be part of their family, no matter what it takes to get there? Let me at it!

To hear about more of my BEA adventures, check back next Wednesday.

I hope to see you then 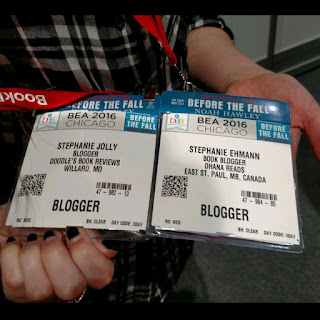