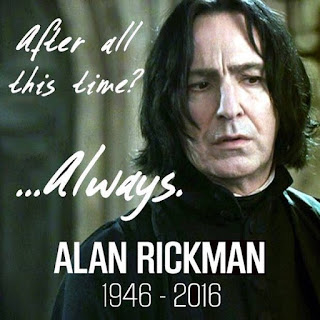 Today, the Harry Potter fandom unexpectedly lost one of our actors. Alan Rickman, who played Severus Snape in all eight Harry Potter movies, died suddenly after a fast and secret battle with cancer. He was only 69.

Though we all know Rickman was involved in many other film and theater productions, there is no contemplation when it comes to which of his roles he was most known for. For fans of the books and movies, Snape was a character that stole our hearts, and I think we can all agree that Rickman was the perfect person to bring him to life. From Sorcerer's Stone to Deathly Hallows Part 2, we watched as he brought more and more of Snape into light, gradually showing us the truth and reducing us to sobs as the whole story came into view.

Thinking back on the movies, it's an amazing thing to replay the many different levels of Snape's attitude, and how well Rickman played him. To think of Chamber of Secrets Snape, compared to Deathly Hallows 2 Snape, there are huge differences, and it's rare to find an actor that can capture the spirit of a character in such a way as to bring each of his dimensions and sides to the table. To be able to play.. certain scenes... and have them come out absolutely flawless, shows the true talent of an actor. And we know, from watching the movies, that Alan Rickman was certainly talented.

When my mom woke me up this morning to tell me, I was in an immediate state of shock and denial. Not believing it, I went back to sleep, basically thinking:

But then I woke up and went straight to J.K. Rowling's twitter account. Before I could even get there, I saw "ALan Rickman" trending on twitter, and I knew it was true, even before I found the tweets. 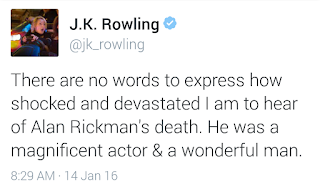 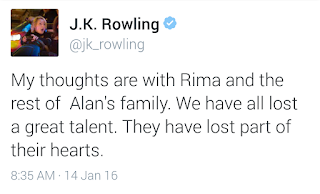 These tweets then led me to the account of Emma Watson, where I found tweets from Rickman's fellow cast members, all expressing their love. 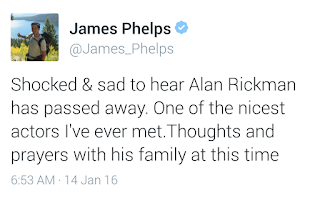 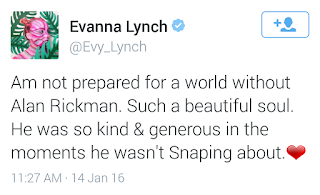 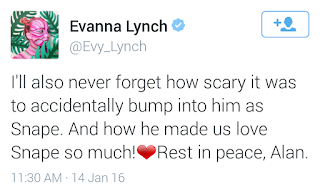 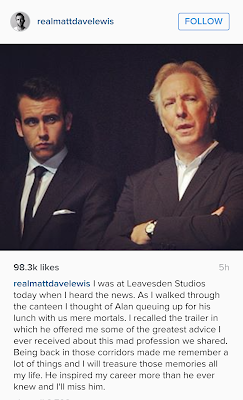 And then, of course, our Golden Trio 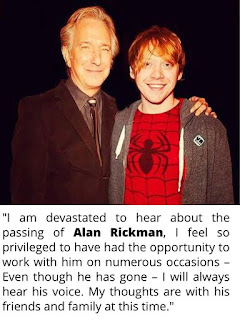 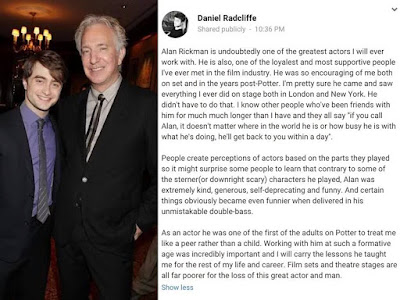 While our inner monologue told us:

To help with the emotions, I headed over to YouTube, where I immediately went to one of my favorite bits of Alan Rickman on the Tonight Show.

And here, a ten minute video where Rickman talks solely about what it was like to portray Snape. The little things. The difficulties. The joys.

Snape being such an important character to me personally, I just want to send out a Thank You to our perfect actor. For bringing him to life in the best way possible, and loving the series as we do.  Like the rest of the fandom, I will be eternally grateful. For the red carpets, interviews, weeks upon weeks of fastening those buttons, and the copious amounts of head slaps.

Alan Rickman may not be on this earth anymore, but he will always be in our hearts. He will be remembered when the movies are played. When we, the Potter Generation, someday read the books to our children and shed silent tears as our eyes travel over the words, "After all this time?"

I don't know about you, but in my mind, I will forever hear Rickman's voice answer