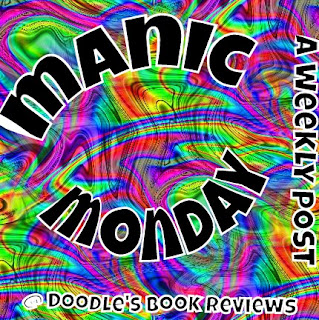 Manic Monday is a weekly post at Doodle's Book Reviews that hilights the current week's TBR, the previous week's book haul(s), and any big bookish plans for the current week. Feel free to leave a comment!

Welcome to the first post for Manic Monday! As you read above, this is a weekly post where I'll spill you on any book hauls, my TBR for the week, and bookish plans (i.e. signings, conferences, meet-ups, etc.) I may have for the upcoming week. So, let's get started! 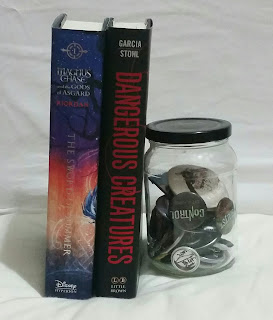 This week, I'll be reading MAGNUS CHASE AND THE GODS OF ASGARD, as well as DANGEROUS CREATURES by Kami Garcia and Margaret Stohl. I did a lot of reading last week, where I read the entire Caster Chronicles in five days, starting BEAUTIFUL CREATURES on Monday and finishing BEAUTIFUL REDEMPTION just an hour before meeting Margaret on her BLACK WIDOW: FOREVER RED tour on Friday, so I'm not shooting for a huge TBR this week. Plus, I'm reading Magnus Chase with a buddy, so it'll be a bit of a slower read than I'm used to, due to making sure we're reading the same things at the same times. 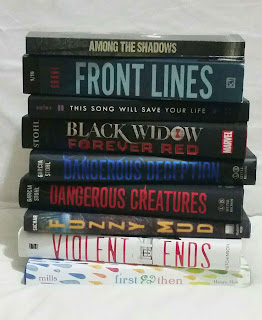 Last week's haul includes the book mentioned above, DANGEROUS CREATURES, as well as book two in Ridley's series, DANGEROUS DECEPTION. Also included are Margaret Stohl's BLACK WIDOW: FOREVER RED. and the newly-released anthology AMONG THE SHADOWS, by thirteen authors, such as: Demetria Lunetta, Mindy McGinnis, Lydia Kang. THIS SONG WILL SAVE YOUR LIFE by Leila Sales, FIRST & THEN by the lovely Emma Mills, VIOLENT ENDS ( another anthology, by Shaun David Hutchinson, Kendare Blake, and more.), FUZZY MUD by Louis Sachar, and FRONTLINES were additions this week as well.

Bookish Plans:
Slowly but surely, the event season is winding down. There are a few in November, but not too many, and I have 0 scheduled from now until the first of the month. If something pops up, I will definitely update you, but as of now, October = 0.

*Disclaimer: I am a MAJOR mood reader. TBR is always subject to change.
Posted by Unknown at 4:36 PM